What is Vitamin D?

Vitamin D is a fat soluble vitamin that your body needs to absorb calcium. It also plays an important role in maintaining muscle strength. Vitamin D deficiency is associated with reduced calcium absorption, bone loss, reduced muscle strength and may increase the risk of broken bones.

How much vitamin D do I need?

The American Academy of Pediatrics recommends 400 IU or 10mcg of vitamin D each day for infants from birth to 12 months of age. Vitamin D is found in formula or given as prescription drops (necessary for all breast-fed infants). Adults under 70 years of age should consume 600 international units (IU) or 15 micrograms (mcg) of vitamin D daily. Adults 71 years of age and above should consume 800 IU or 20mcg daily. Your healthcare provider may recommend more vitamin D than above stated amounts based on your individual needs.

What populations are at higher risk for vitamin D deficiency?

Some of the populations at higher risk for vitamin D deficiency than the general population include:

What should I do if I am at high risk for vitamin D deficiency?

What are the sources of vitamin D? 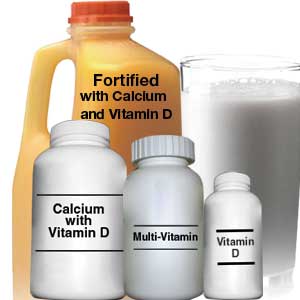 Sun exposure is not a reliable way to get vitamin D and there is concern about harmful ultraviolet rays that can put an individual at risk for skin cancer, cataracts, and premature aging. Vitamin D from food and dietary supplements offer the same health benefits as vitamin D from the sun without the danger of sun exposure.

Vitamin D rich foods tend to be high in fat and not eaten as part of the typical daily American diet. Sources include fatty fish, fish oils, sun-dried shiitake mushrooms, and egg yolk. There are several foods that are fortified with vitamin D. Vitamin D fortified foods do not naturally contain vitamin D, but the vitamin is added to the food or beverage in the manufacturing process. Most fortified foods contain small amounts of vitamin D in a serving.

There is limited but growing information about the vitamin D content of foods.  The vitamin D content of foods is stated in international units (IU) or micrograms (mcg). For example, milk is fortified with 115 to124 IU or 2.8 to 3 mcg of vitamin D in each 8-ounce cup. Most dairy products including yogurts and cheeses have not traditionally been made with fortified milk. However, recently some dairy products and other foods have been manufactured with vitamin D added. It is important to read food labels for vitamin  D content.

(What is the difference between vitamin D3 and vitamin D2?

The type of vitamin D added to fortified foods varies. Vitamin D3 (cholecalciferol) is found in animal products or made from the ultraviolet irradiation of lanolin. Vitamin D2 is more common in vegetarian food sources and manufactured through the ultraviolet irradiation of yeast. Foods fortified with vitamin D3 include cow’s milk, some yogurts, vitamin D fortified orange juice, some breakfast cereals and some breakfast bars. Vitamin D3 and Vitamin D2 can also be obtained from multivitamins, in combination with some calcium supplements, or alone as separate vitamin D supplements.

The nutrition fact labels of supplements can be useful to find out the type of vitamin D added. Individuals who follow vegan diets (strict vegetarian diets that exclude all animal products and by-products) will prefer the vegetarian source of vitamin D, vitamin D2.

It is sensible to avoid sources of vitamin D that are high in retinol.

Vitamin D and vitamin A are both fat-soluble vitamins that may be present in some of the same foods or supplements. Cod liver oil, for example, contains high amounts of both vitamin D and a type of vitamin A called retinol

A large study found that postmenopausal women who consumed very high intakes of retinol (from food sources such as cod liver oil and liver, from certain multivitamins, or from vitamin A supplements) appeared to have an increased risk of hip fractures. However, there was no association between high intakes of another type of vitamin A, called beta-carotene and the risk of hip fracture. Beta-carotene is found in a wide variety of yellow and orange-colored fruits and vegetables, as well as green leafy vegetables.

Further research is needed to study the relationship between retinol from various sources and fracture risk. In the meantime, it is sensible to avoid foods and supplemental sources of vitamin D that are high in retinol. Until more information is available, it is wise to avoid cod liver oil and vitamin D supplements that have vitamin A added.